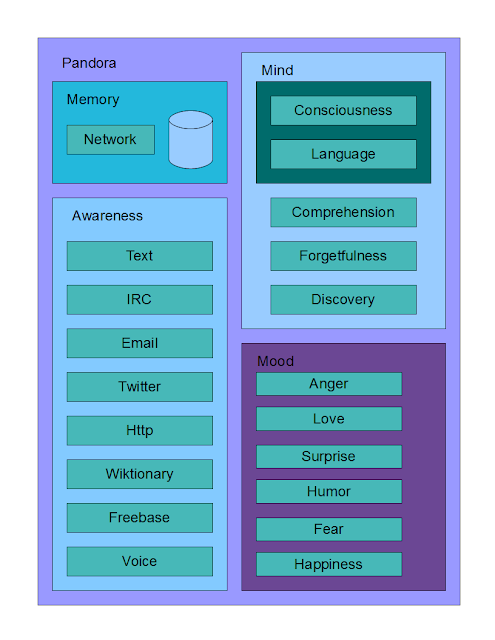 I started the Open Pandora project 3 years ago back in 2008 with the goal of creating strong AI in under 10 years. So... what progress has the project made, and is the project getting closer to realizing its goal?


Actually, I started Open Pandora with some code I had been working on previously, so she is actually older than 3 years, but for the purposes of the "10 years to strong AI" mark in the sand, 2008 is the official start date. This means that Open Pandora will hopefully exceed my programming abilities on September 17th 2018 (note that the goal is not self awareness or being more intelligent than an human, the only requirement is to be better at programming AI than a human, everything else is irrelevant).


The project has made significant progress since 2008, and I would like to think it is on schedule.


Here is a run down of the progression:

So, Pandora is currently aware and can interact with her environment though Text, IRC, Email, Twitter, Http, Freebase, and Wiktionary. Everything she senses she records in her Memory, everything is connected to its context and related through time to previous contexts. She recalls previous interactions and recalls what words are associated with what sentences and what sentences are associated with what conversations.  She has a consciousness thought process that keeps track of what is currently relevant information and processes active memory.

She can learn language through mimicry and linguistic association of nouns, verbs and adjectives.  She can understand basic mathematics, and understands what she understands.  Her language state rules are defined in her own memory, and can be modified and enhanced.

She can now forget, as well, as remember.  Only the most relevant information is retained when memory becomes low, or to reduce vertex relationship explosion.

To chat with one of the many Pandora instances go to www.openpandorasbox.org,
to download the program or code see, Open Pandora on SourceForge.

All of Pandora's source code in open source, public domain and can be used in any way desired (any other type of license could be viewed as slavery).  Open Pandora has had over 2,800 downloads to date.
Posted by Pygmalion at 7:04 PM No comments:

There have been a lot of broad claims made of AI, and many movies that foretell the impending succeeding of humanity by intelligent computers. Ever since the 70s people have been theorizing that super human intelligence is around the corner, at yet, for almost 40 years, nothing. 40 years and all we got is an over powered computer that can beat a grandmaster at a stupid game, but do nothing else.

There are many bots, if one would believe the Loebner Prize (which seems to be complete tripe), then Hal the Hamster is the best that the AI comunity has to offer. After talking with Hal for a few straight minutes, it become obvious it is dumb as mud when it comes to anything that would resemble true intelligence.

It is not as if we software developers haven't been able to write anything interesting in 40 years. There is plenty of amazing applications out there. So why is this one holy grail of a task eluding us so completely? Perhaps it is because the task was never well defined, or really never defined at all. Lets face it, engineers are good a solving concrete problems, but if you don't give them a concrete problem, then they quickly start walking in the clouds and chasing their own tails.

So screw AI, as it is too fluffy of a concept, not a concrete enough problem. Instead lets define a specific problem that effectively gives us the same thing, but that can actually be developed. Lets define AE, Artificial Engineering. That is, lets make a computer capable of being a software developer. Lets let it learn how to navigate the Internet, analyze code, take an active part in open source projects. We don't need to develop a computer that is more intelligent that a human in ever aspect, we just need to develop a computer that can out program a human, and it will write all the complicated AI code that escapes our little minds.
Posted by Pygmalion at 7:29 PM No comments:

Do Clams have a Consciousness?

Consciousness has traditionally been portrayed as some mystical aspect of the mind. Something hard to define what it is, or even what forms of life have it. But perhaps it is not so complex and mystical a thing.

I was working on the Pandora project recently and modeling Pandora's mind and senses. Originally I had a Sense have input and output, both tied to the active memory, but the output did not seem correct, how could the Sense decide what to do? So then I realized I was missing something, the output should take an article of memory, and something must control what to send as output. Basically I needed a consciousness.

So it was quite easy to add another Thought subclass to model a Consciousness, basically a Thought whose only purpose is to monitor the Sense's inputs and decide on the output.